1918 Foundation of a boarding school at Hohe Strasse 30 by the congregation’s Rabbi , Hermann Hirsch, in response to the educational needs of the time and the decline of several private Jewish schools in Germany.

1933 Hirsch prepares the conversion of the boarding school into a day school. In addition, after the closure of the synagogue (in May), the services of the congregation are held in the foyer of the house.

1935 Official recognition as an elementary school. In the spring, the school begins operations. Classes are moved to the rented house Hohe Straße 16 in October 1935. The house Hohe Straße 30 is used to accommodate the external school.

1936 In October, 76 students attend the educational institution. 16 come from Coburg.

1939 The Hirsches emigrates to Palestine. The Jewish children no longer have their own school. All former students are able to flee the country along with their parents.

[“Above all, it is important that the sophomores feel completely free and undisturbed and have a youthful, carefree time in a like-minded community.”]

[“To the more than 40 children who live here with me and with me, I strive, together with my staff, to provide a lively and varied education: Science, art, culture, sports – everything goes side by side and the children never have an unfulfilled minute.”]

The education provided by the institute is indeed very versatile and also tailored to meet the needs of a possible emigration to Palestine. The children are physically fit and equipped with the necessary manual skills to be able to contribute to the newly founded state.

[“For the boys is also nice here in the huge garden. In the evening we (…) ride our bikes (…). That’s great fun for all of us. Of course, we also study hard. It is not easy to keep so many Jewish boys in check. They are quite temperamental and headstrong. You have to be so energetic, strict and patient. In return, they pick things up easily and are quite interested.” ]

The teacher Rudolf Kaufmann in a letter, quoted from: Reinhard Kaiser, Königskinder, Frankfurt am Main 1996

The Jewish Cemetery on the “Glockenberg”

1873 The Jewish religious community acquires its own burial grounds.

1942 In September, after the last Jewish citizens have been deported, the city decides to use the unused part of the Jewish cemetery for the burial of Russian “civilian workers”, i.e. forced laborers.

1943 The city decides to postpone the acquisition and abandonment of the Jewish cemetery until the end of the war. The cemetery is currently the only Jewish site in Coburg that is still in use. Although the Jewish religious community ceased to exist in 1942, burials can still take place in the cemetery maintained by the city of Coburg, most recently in 1988.

Hands, Jars, Stars: the Richness of Symbols of the Jewish Cemetery

In the Jewish cemetery, tombstones that have fallen over or sunk into the ground are not put up again, as the originality of the burial place is to be preserved. Instead of a floral decoration, small stones are placed on the gravestones. The small stones remind of the exodus of the Jewish people from Egypt. The dead in the desert were honored and loved by placing as many stones as possible on their graves. The feet of the dead lie in the direction of prayer to Jerusalem.

In Coburg the older graves with the children’s graves are located in the upper part of the cemetery. All gravestones already bear, in addition to the Hebrew inscription, information about the deceased in German.

The scheme of the inscriptions: The grave inscription is preceded by the Hebrew characters פנ (P. N). = “Here rests” = „Hier ruht“
This is followed by the name, date of death and other personal details or tributes or at least a Bible verse.

The inscriptions are completed with the Hebrew characters: תנצבח (T.N.Z.B.H.) = May his/her soul be bound in the bundle of life.

Special signs also inform about the status, origin and/or the special activities of the deceased. Several gravestones of the Jewish cemetery bear some of these symbols:

Two hands: they identify the deceased as a member of the Ahronid tribe. These had the privilege of the priesthood: therefore two blessing hands.

A pitcher:it indicates the descent from the tribe of Levi. This was responsible for the cultic purity in the temple.

A shofar: this indicates that the deceased was a shofar blower. The shofar is a ram’s horn blown on New Year’s Day.

There are other symbols on the memorial to the Jewish martyrs of the First World War:

the Star of David:It is called the Shield of David and is formed of two triangles interlocked. In the 17th century it became the emblem of the Jewish community in Prague. Since 1948 it has adorned the national flag of Israel. It has various meanings. Among other things, its six points represent the six days of creation.

“Temple, prayer room, shul’, Bejt ha-Knesset – the functions of a synagogue are as versatile as its names. Here people pray and learn, meet with friends and exchange ideas.”

The synagogue is an important place of prayer. It forms the center of Jewish life. The word synagogue comes from the Greek and means “place of assembly”. After the destruction of the Temple in 70 CE, the rabbis developed the idea of a house of prayer to keep the faith alive among the people in the Diaspora. The significance of the temple was never forgotten.

Unlike Christian churches, there are no rules for the design of a synagogue. Its architecture often reflects the culture of the country in which it is located.

A women’s area (in Orthodox synagogues there is a gallery for the women).

The bima is a platform from which the Torah is read.

The Torah shrine, the holy ark, contains the Torah scrolls. It is the centerpiece of all synagogues. It is always opposite the wall facing Jerusalem. The Torah is the most sacred object in Judaism. That is why it is often richly decorated. The holy ark is flanked by two pillars. They are said to recall the first temple of Solomon, at the entrance of which there were two pillars.

An eternal light burns in front of the Torah shrine.

The Nicholas Chapel becomes a Synagogue

“Do we not all have one Father, did not one God create us all?”

In 1873, the St. Nicholas Chapel, built in the 15th century and unused since 1806, is made available to the Jewish community for its services. No rent is charged by the city of Coburg.

“Judenkirche” was the popular name given to the Chapel of St. Nicholas on Ketschendorfer Strasse, which served as a synagogue from 1873 to 1933, probably the only example of the conversion of a church into a synagogue in Germany.

During the 60-year period of use, several changes are made by the religious community, always in consultation with the city. The costs for these alterations must be paid for by the Jewish community.

In order to increase the income of the religious community, place cards are issued and a place fee is set.

Concerts are also held in the synagogue.

The End of the Jewish Community in Coburg 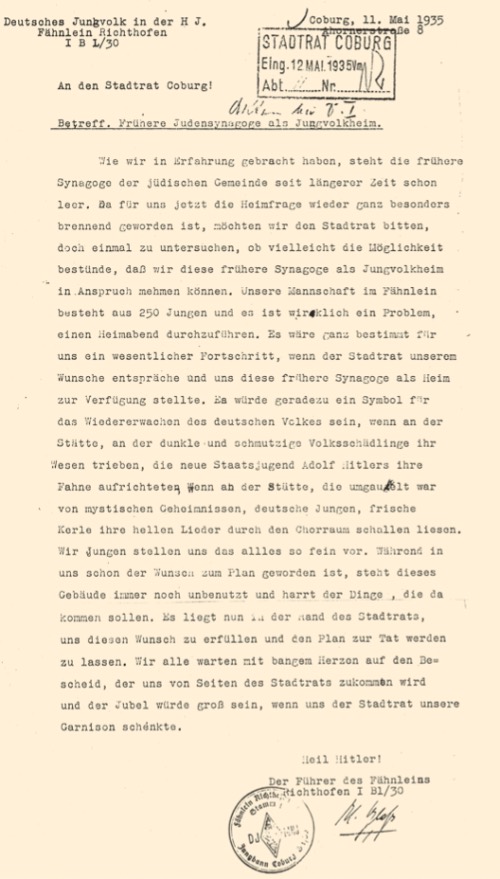 1930 The congregation complains that in previous years visitors to the service were harassed on their way to the synagogue and asks for police protection.

1932 Window panes were broken again. The municipality offered a reward of RM 100 to find the perpetrators – without success. In addition, the city cancels the usage contract for the synagogue.

For the “reconstruction” of the St. Nicholas Chapel, the Nazis extort the payment of 6000 RM from the Jewish community. Only after receipt of two installment payments is part of the inventory returned in April 1936.

1935A request by the Deutsches Jungvolk to be allowed to use the church as a youth center is rejected.

1962The church is given to the Old Catholic parish for use.

The Jewish life of Coburg is also reflected in various associations that were founded over the course of time.